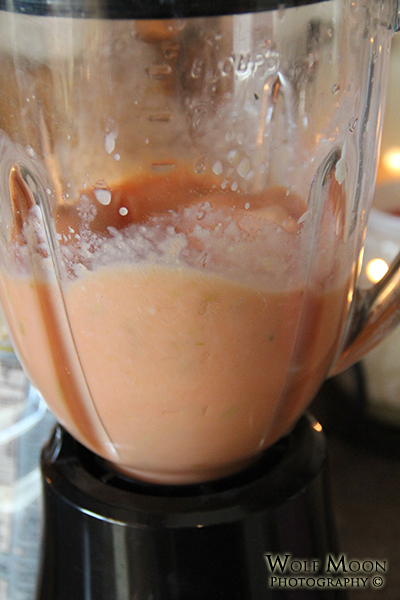 Even though it’s a winter wonderland outside it’s time for another experiment in the kitchen. The last recipe, Melon Mango Pineapple Frosty Paws, was such a hit that we decided to mix it up and do a little variation on it.  This time we didn’t add the mango or the yogurt so it would be a simply fruity (with a pinch of coconut and honey!) concoction.

My helper dogs had all abandoned me this time because they were all holding down the couch and perfecting the term ‘lazy’ so I had a go of this on my own with no taste testers.  I had to pray it would turn out right for their spoiled rotten doggie selves (which I shouldn’t have feared because it was a hit when they finally got to try them).

Without the hustle and bustle of having a dog (or three!) underfoot in the kitchen, I knocked this one out pretty fast.  I had bought a pretty large watermelon and cut it up the night before so I only needed to cut up the pineapple into smaller pieces than the chunks I had bought before being able to combine the ingredients all together into the blender.  (My blender would like to mention that I’ve been abusing it since I discovered dog treat recipe!) 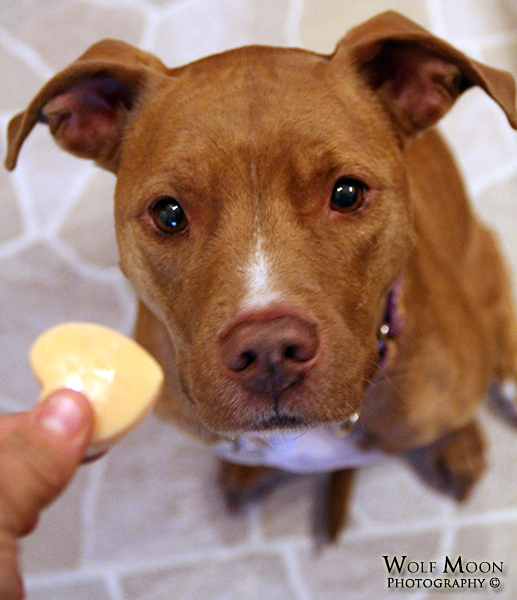 It was another simple and tasty recipe that definitely made the pups drool for more, but I know what you’re waiting for – the recipe.  Here you go!

–          Combine pineapple and watermelon into blender.

We’ve been messing with a bunch of recipes l 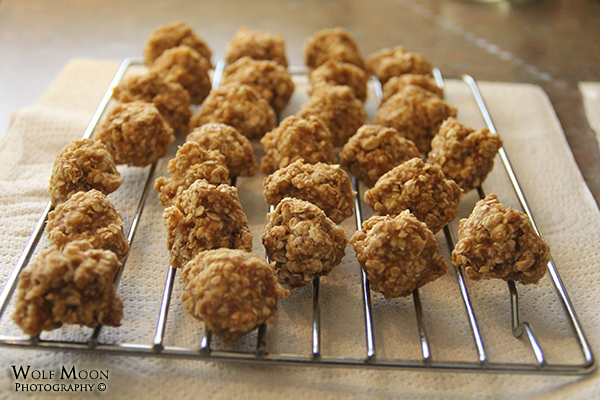 ately since I’ve not been happy with a lot of the store bought varieties available to the monsters.  This time around, we did a simple recipe that we found on Pintrest and modified it for our dogs and their allergies.

This recipe is fairly simple, inexpensive and easy to do and only takes a short time to make so you can stock pile yummies for your dog and still have time to get that long walk in with your dog in the same day. We had a triple batch done in about forty five minutes – including prep time.  And they were also a major hit with the monsters.

Are you ready for the recipe?  Here goes! 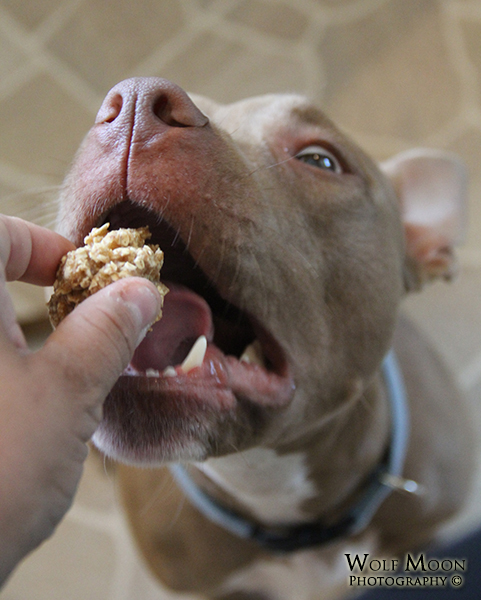 This recipe makes around 1 to 2 dozen rounds.  We actually tripled everything so that we could make more for the monsters.  This recipe is also vegetarian and originally found on Doggy Woofs.  Enjoy!

With my new obsession with Pinterest, I’ve been on a dog treat recipe hunt.  Now, couple that with 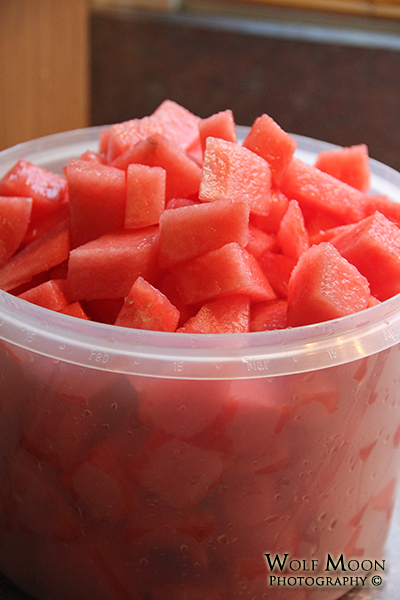 the extreme heat and I was given the motivation I needed to give a recipe a try – especially since it involved my favorite fruit, watermelon.  When that was coupled with some banana and a touch of honey for some natural sweetness and everything was golden.

The dogs were very pleased when I attempted this recipe and it gave me a chance to play with some of the cute molds I’d found at various places (mostly dollar stores) for these delectable frozen goodies.  The whole cost of making these (and we made 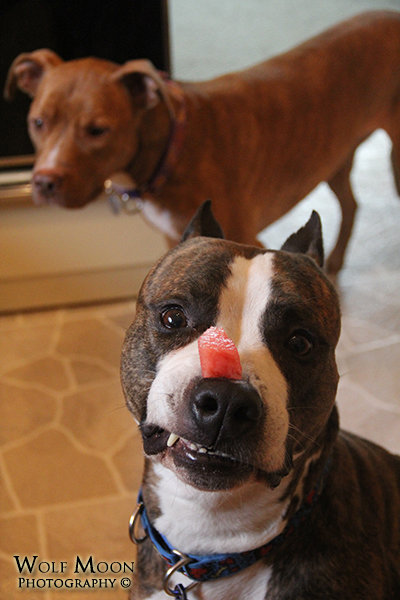 quite a few!) was about eight dollars and pretty reasonable since I’m a stickler for working on finding mostly locally sourced goods.

I started with my two helpers, Ryker and Luna, supervising and cleaning up the watermelon.  They made sure that if I dropped a piece that it was promptly cleaned…er…eaten up. Once they realized all that was left on the counter was the rinds, they focused on messing with the sticker that had fallen off of the watermelon.  Poor Ryker, of course, had to suffer at my hands and be embarrassed with me sticking it on his muzzle.  (He wasn’t very amused!)

Afterward, we cut up a ripe banana.  There was very little pomp with this and the dogs were less than 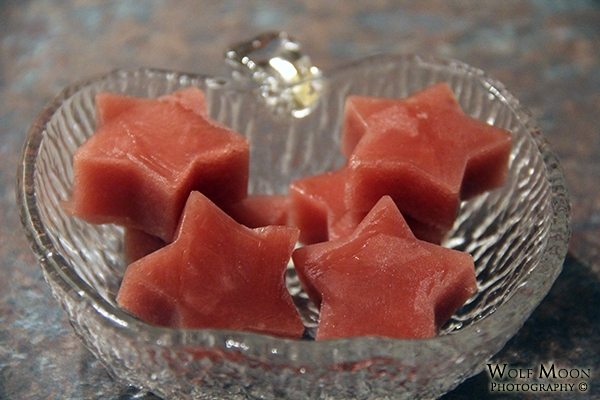 happy when I didn’t “drop” any pieces onto the ground for this item.   (Sorry, guys!  Recipe called for one whole banana.)

After all of that was said and done, I hooked up my blender and put 15 or so chunks of watermelon into it.  I then added the cut up banana and a little bit of honey for some natural sweetener and blended thoroughly.  (I used the “Smoothie” setting on mine.) 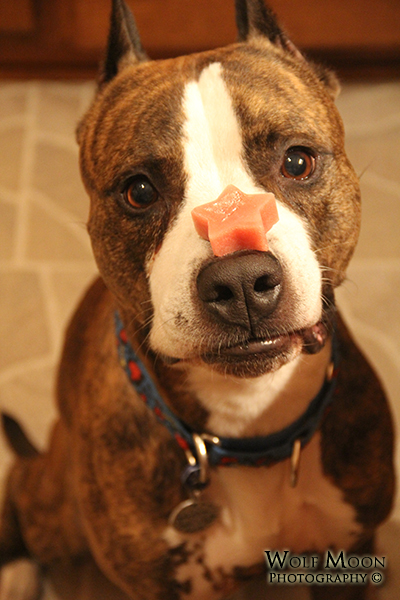 Once it was the consistency I wanted, I grabbed my molds and poured the mixture into each of the shaped compartments until I’d filled them up and put them all into the freezer to harden.  It took about two and a half hours until they were frozen solid and ready for pooch (and husband since he stole one!) consumption.

All in all, it was a major hit at the house and everyone was begging for more (A major thanks to Sugar the Golden Retriever for this awesome idea!).  We’ve got plenty of items left so we’ll probably be repeating this recipe in the near future to keep the pups hydrated and happy in this horridly hot weather we’ve been having.

Here’s the recipe if you’re interested in doing this at home for your lucky dogs!