I’m sitting at my laptop after a pretty darn successful weekend at the Cinco de Mayo NWDA pulls that were held this weekend locally to me and thinking about how far I’ve come as a handler, a trainer and a dog owner.  I brag all the time on Ryker and all of his successes but in reality, he was the easiest dog in the planet.  He’s biddable and willing to work.  He’d do anything just to do things with me.  He and Luna spoiled me on trainability and success.  Anything I’ve asked them to do, they’ve done and done it well.  Then Lyric came into the picture.

Lyric wasn’t that easy dog I was used to.  She was stubborn and incredibly determined to do things her way when she wanted to do them.  Sure, she loves me and wants to be with me (well, up my ass would probably be the best definition) but as far as doing something because I asked if it involved not running at warp speed 24/7?  Forget it.  She’s a true free spirit and she utterly loathes being restricted.  (It’s pet peeve numero uno in her book.  Seriously!  She told me so.)

She loves flirtpoling, lure coursing, agility (when I’ve tinkered with her on obstacles) and things that allow her to do her thing without being hindered by a leash or strict rules – especially if they involve food or a rousing game of tug.  Those are fun for her…weight pull, yeah, it definitely wasn’t her thing.  At least it wasn’t initially.

I pushed her in weight pull.  I figured if I worked her like I did Ryker and Luna, I could convince her that it wasn’t so bad.  I used the same methodology, the same training, the same everything and I did it so incredibly wrong with her.  I seriously almost ruined her for weight pull (and many other sports too!) by forcing her to do something she wasn’t comfortable with and when she wasn’t ready in a manner that wasn’t conducive to her learning. Yeah, she got her United Weight Puller in UKC but she wasn’t happy while she was doing it (and I have the photographs of the looks of death I got for it as a reminder too!) and it bothered the living daylights out of me because I detest doing something that upsets the bond I have with my dogs.  They’re my buddies and their happiness and wellbeing is paramount in my book.

I put her in pseudo retirement from weight pull after she earned her basic weight pull title in UKC.  I told myself that she’d never make a weight pull dog.  It wasn’t her “thing” and we’d find something else that she loved to do or keep doing things she loved – like showing.  (Seriously, this dog has a thing for flaunting her little terrorist self in a “look at me” fashion and it helped in finishing with a Best of Opposite in ADBA to earn her Championship!)

Unfortunately, Mother Nature nixed our show career in ADBA when she developed pyometra.  It sucked immensely.  All the hopes and dreams of getting her Grand Championship in ADBA went poof since they don’t offer altered classes like they do in UKC.    I seriously had to sit down and ask myself what we were going to do to keep her zero to warp speed brain mentally stimulated and allow her to shine when she couldn’t do the one thing that she loved more than the flirtpole or fighting me on a tug.  I had a LOT of time to think since she had to heal from her emergency spay.

After months of healing (and driving me batty!), I decided to go back and give weight pull a try.  I figured it wouldn’t hurt and we could do some light drag work once she was into it to keep her in good physical shape and tire her out a little so she wasn’t so bounce-off-the-walls-and-drive-mom-nuts kinda crazy.  We went back to the beginning.

I came to realize that this was where the real start to our problems had happened.  It was the part where I, as a handler and trainer, had failed her.  I had compared her to my two super stars and their distinct “Throw another at me!” fashion.  I realized then that I had to go slower with her or I’d mess up again and likely do irrevocable damage to her as a sporting dog.  I couldn’t and I wouldn’t let myself fail her again and so we quite literally started from the puppy basics – the introduction and positive association with the harness.

It’s been a slow couple of years.  We’ve been doing drag weights and a few competitive pulls here and there but nothing really big.  We’d pull one weight and handler withdraw and then work her through one more just for practice.  I never let her fail.  The second she started to get frustrated, I had them push the cart.  I never wanted her to think she couldn’t do it.  I had to let her think she was free and the almighty queen of the track.  It worked.  I couldn’t believe it, but it worked.  Lyric had finally decided weight pull wasn’t the bane of all things and she stopped looking like she was a poster child for the ASPCA commercials.

This weekend she proved it to me again that she was still the little hellcat that could.  That she was willing and ready to do things if I showed her that they were pretty darn awesome and that she was pretty darn awesome for doing them.  She’s worked past all the hang ups I’ve had and she keeps improving each and every time I put her on the track and the best part?  She wags her tail the WHOLE time.  Today was no exception when she broke her personal best not once but twice – first in the morning with 1,374 pounds for 35.23 times her body weight of 39 pounds (and taking a 2nd place with four dogs in the class!) and then once again in the afternoon by pulling the next increment up of 1,442 pounds for 36.97 times her body weight and another second place!  (We’re a LONG way from being competition for the first place dog – Team Puggle – in that class, so it was a good spot!)

I’m still in shock, honestly.  Had I been asked if I thought she’d come this far years ago I would have A) looked at you like you were crazy and B) told you it would never happen in a million years.  I was dead wrong and it took a lesson in humility, a life changing situation and a phenomenally wonderful dog to show me that sometimes change is the best thing to happen and that starting over isn’t so bad.  It also reminded me, once more, that you don’t get the dog you necessarily always want but you always get the dog you need.

Thank you for proving me wrong, Lyric.  I am so unbelievably proud of how far you’ve come and so excited to see how far we’ll go. 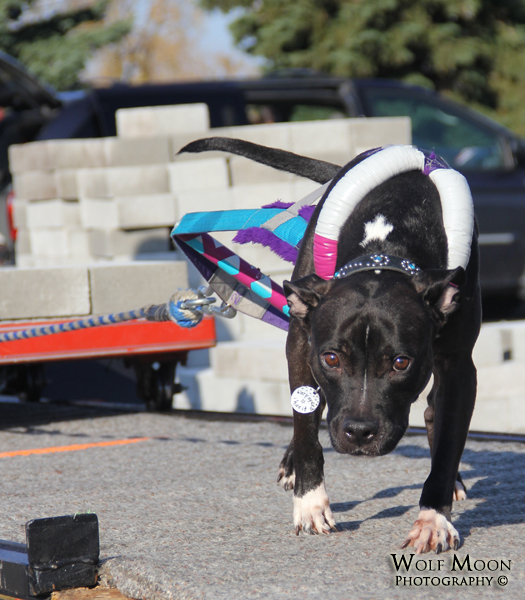 Lyric at a previous NWDA weight pull with her tail waggin’.