Every time I’m on Facebook, I see hundreds of faces that look scared, alone and in need of some kind soul to open up their heart and their home.  Each of these posts shatters my heart and rips me apart to the very soul – especially when the photos also show the abuse and neglect that these innocent creatures have undergone at the hands of man in his darker form. 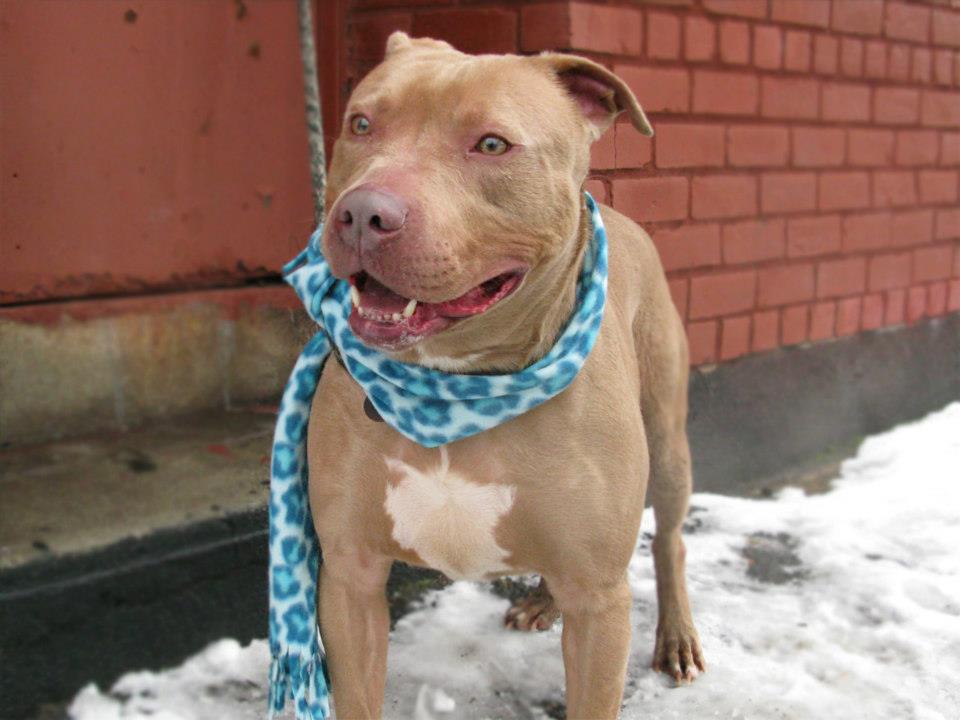 Rover, Animal ID# A0894033, is available at the Brooklyn NY
Animal Care and Control and is labeled as URGENT.

The reasons for these animals ending up in the shelter system all vary from animal to animal but the reality of the matter is the problem has become a national concern for all animal lovers young and old.  We, as a nation, are responsible for the problems in our shelter system.  Now, I’m not saying that this is the case for every single shelter or rescue organization across the nation but the vast majority needs some serious overhauling in terms of education, training, advertisement, etc. to reduce the number of animals that are euthanized across the country daily when a plethora of homes are available, waiting and WANTING these animals to be part of their loving homes.

I’ve personally been involved in rescue for many years, even with my involvement in purebred dog ownership, and my home is called home by one very special, goofy pit bull mix boy that would have otherwise been euthanized due to his extreme dog-on-dog aggression.  He is not the only one of his kind that lands in shelters and rescue groups on a daily basis.  Most of these groups, however, are ill-equipped to handle high drive, reactive dogs that may have some personal baggage attached to them from genetics, upbringing or personality and they traditionally end up paying the ultimate price – their lives.

The evolution of the shelter and rescuing system is the first step that needs to be addressed.  The systematic euthanization of animals on the basis of space or treatable ailments with a simple course of antibiotic in many of the city and county run shelters and animal control agencies is a major concern and one of the sole reasons that so many private organizations exist in today’s world.  That being said, private organizations may not be a much better alternative for many homeless animals if their intentions are far from pure.

There are far too many private organizations out there who take in cute, cuddly puppies to turn a quick dollar (making themselves no better than your average puppy peddler), those who go in with a bang to put the spotlight on themselves and what good they’re doing and those who get so overwhelmed that they eventually get deemed under the dreaded term of hoarder because they didn’t know or couldn’t say no to a pleading face.

Now, I am not faulting these organizations for doing what they feel is best for the animal, the overcrowding issue, etc. but there has to be another way.  Over time, I have spoken with many people involved in animal rescue from all perspectives from simple pet owners to diehard rescue people and even responsible breeders.  The consensus is the same when it comes to the surrender or abandonment of pets across the nation – better resources for spay/neuter and education.

Now, you’re probably all going “Didn’t you write that article on spaying and neutering a little bit ago?”  Why yes, I did (if you missed it, click here).  While I wanted to give each and every single dog owner a chance to analyze what worked best for their home and their pet with no judgmental attitude on the pros and cons on both sides of the fence, the majority of people (and their pets!) would benefit from altering their animal simply on the sake of convenience because dealing with an intact dog or bitch can be an absolutely massive pain in the fanny because neither are fun to deal with on an aggravating hormonal tirade.

This problem, however, is what leads to the need for more low cost and free spay/neuter programs that could be available to the general public.  Let’s face the facts that more people are willing to have it done if they don’t have to shell out a ton of cash to get that fuzzy feeling of being a good pet owner.  Most veterinary clinics for your average spay or neuter run anywhere from $100 on up and for many people, that kind of money is a lot to drop on a dog in the economic times many pet owners are facing today.  These same people still want to do ‘the right thing’ and have their pet fixed.  This is where those clinics come in.  If you own a bully breed, like I do, free and low cost clinics abound for our type of dog but John Q. Public who owns a golden, a lab or any other non-bully breed dog is out of luck for not having one of the chosen canine pariahs of the world as their companion animal.

While breed specific clinics are helpful in urban areas they can still do harm to the average pet owner who doesn’t want to own a bully breed and the simple fact of the matter is more NON-breed specific clinics need to happen.  Luckily, we have a few here in the metro-Detroit area like All About Animals that don’t care what type of dog you have, you can have him or her spayed or neutered for a fairly reasonable amount of money.

Education is the key for pet owners out there who are surrendering their animals.  Sadly, many of these individuals don’t care in the end but the resources of low cost training, behavioral analysis and veterinary services offered at a reasonable rate.  Sadly, many dogs are turned in when they hit that snot-nosed teenager stage where they enjoy testing the limits and being utter brats.  It’s not a fun stage to live through but it is livable.  The key point at this stage is for rescues, trainers, breed advocates, etc. is to reach out to pet owners who are considering rehoming their pet because of these behaviors and assisting them and providing a support system to make it through the “terrible twos”.  Thankfully, the Internet has afforded an avenue for much of these problems but the rescues and shelter systems would do well to develop programs to pet owners that enable them to at least attempt to work through the situation before they make the hardcore decision to give up their pet.

In the same token, the rescue and shelter system needs to be aware of the adoptable dogs personality quirks and breed traits and place in a home appropriately.  For example, a high drive and ball crazy border collie would be an inappropriate fit for an elderly couple who lives in an apartment.  The same could be said for a sedate mixed breed dog that would likely to just sleep all day going into the home of someone who likes to jog, hike and generally be very active.  There are many questions that need to be taken into account when it comes to appropriate placement of dogs in the right home and a group doesn’t need to be over zealous or nitpicky in their placement but does need to make sure that the dog will be a right fit and to stand behind the dog if things don’t work out (which many don’t).

Ultimately, the entire animal loving community needs to come together with standards, ethics and practices that will help every walk of life – especially those who are voiceless.  Education, teamwork and ethics must ultimately come into play to bring animal rescue into the next level and provide our homeless companion animals the best possible outcomes and place them in loving forever homes without bias and with the animal’s best interests at heart.  The “perfect” home may be one with imperfect owners who would go to the ends of the earth for their fuzzy buddy.