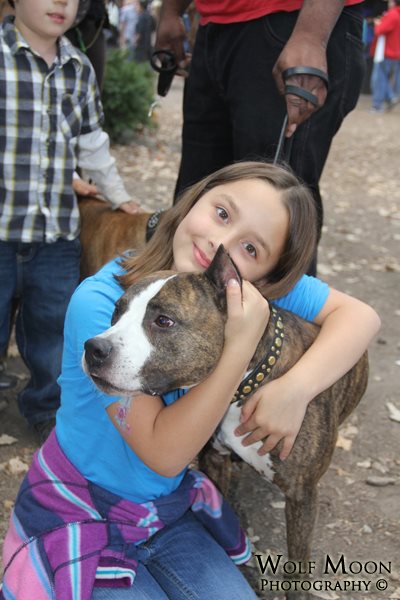 The topic of breed specific legislation and bully breeds is an incredibly hot button topic and it has a vast array of thought processes from the overzealous “can do no wrong” breed advocates to those who are more realistic about the history and temperament on this breed.  My friend Liz recently wrote an article titled “Advocacy As I See It” on her blog after having another breed advocate accuse her of supporting breed specific legislation because she is incredibly realistic about the breed – especially since she shares it with one very special dog named Inara who has had some ups and downs becoming a model doggie citizen in a state that was known for its horrendous BSL (that was recently repealed!  Yay!).

Now, I’ve been involved in the breed on a major level after my husband and I brought home our very first dog as a budding young couple in 2003.  My first taste of hatred actually came from my own mother who told me to take my 4 ½ week old “baby killer” out of her house and get rid of her.  (Guess what didn’t happen?)  I was shocked and furious.  How dare she talk about my baby girl like that?!  It didn’t take long for her to change her tune and now she brags about her “grand dog” to anyone who will listen.

Unfortunately, though, she’s not the only one who has thought like that.  Some have changed their mind through persistent education from an unemotional friend who would rather facts be there and not phobia but others still have fear and loathing for the American Pit Bull Terrier.  Let’s face it, these dogs have a history because of a propensity to be dog/animal reactive or aggressive and are incredibly powerful. In the wrong hands, they can be a walking disaster and the numerous media accounts that happen almost weekly are proof testament to that very real problem in this breed.

The unfortunate problem for this breed though isn’t so much the ignorance of the owners (though that’s a major portion), but the caliber of those who advocate for the breed.  To realistically sit there and deny the history of the breed and what it was bred for in its infant stages is to deny the very reason we have such a human stable (or at least they should be!), biddable, wonderful companion who is so versatile they can do just about any task you set in front of them does this breed an incredible disservice. Or as Liz put it, “Blowing smoke up people’s behinds to make them sound like magical little bunny-hugging unicorns in a compact, muscular body doesn’t do anybody any good.  Especially the dog.” And it’s true!

Unfortunately, those who would love to think that they are supporting this breed in its entirety are actually harming it by spreading false propaganda about these dogs.  Phrases like, “Pit bulls were nanny dogs!” (Which isn’t correct!  Staffordshire Bull Terriers hold that title.) and “Pit bulls were bred as herding dogs.” only serve to get those who would prefer to see these dogs demolished more fuel for their fire.  These dogs don’t need lies to pump up the fact that they have a strong and loyal following of responsible owners that they can prove their worth on their own.

For this breed, those responsible owners are actually becoming a minority because we choose to realize that our breed was bred for a purpose.  While that purpose is no longer legal, it doesn’t mean that the breed doesn’t still have the genetic traits that were sought after for that original purpose.  (Genetics are quite funny, one change could tip the balance and screw things up royally – take a look at the Extreme American Bullies for example.)  The ability and willingness of a pit bull to be reactive toward another dog (or animal) is still something that is incredibly prevalent in these dogs.  It’s one of the key reasons many pit bull advocates chant the mantra “Never trust your dog not to fight.”  They may not start it.  They may not engage fully.  They may only snap and snarl at another dog but they most certainly will be blamed for it.

Now, this is not to say that every single pit bull is going to be reactive, aggressive or even selective toward another dog but the genetics behind it are there.  They are, after all, bull and terrier-type dogs and both types of dog are known for those exact traits and it’s something that needs a special owner who is willing to put time and dedication into training, socialization and maintenance of their four-legged friend.

These dogs aren’t meant for every Tom, Dick and Harry after all.  They are a LOT of dog and unfortunately the “Save Them All” faction tend to down play that and make people feel sorry for a dog that would not be a good fit in every household.  No one breed of dog is right for everyone be it a poodle, Shih Tzu, German Shepherd, or Great Dane and until people start to realize that, even if it sucks having to admit that (even to yourself!) then the breed will suffer at the hands of its own advocates because they would rather bury reality into a fluffy, rainbow-colored package that barks lullabies and poos glitter logs.

Being an advocate isn’t always pretty but we have to do it for our dogs.  We have to protect our breed from the ignorance, the over-caring and the unkind.  We have to make sure they are not set up for failure or we will eventually lose this wonderful breed to the government bodies that would seek to regulate these dogs out of existence.

So, please, if you want to be a breed advocate know your breed – the pros AND the cons.  Be realistic about your dog no matter how much you love them and realize that those same breed traits you may want to suppress into you subconscious are still there and because of your unwillingness to embrace (even if you abhor) those traits could set your dog up to fail and your advocacy to crumble.

4 thoughts on “Breed Advocacy and the American Pit Bull Terrier”