While this blog isn’t specifically bully breed related, it is definitely worthwhile.  It tells the tale (or is it tail?) of Icon the German Shepherd and his owner, Jen of Vom Haus Huro.  Jen has been featured here many times and this is another one of her wonderful bits of print.

I do not understand the stigma of the labels applied to a litter of   puppies. For example, the “pick of the litter” is synonymous with quality. However, the “last pick” puppy of a high quality litter could be (and in most cases will be) of higher quality than the first pick of a low quality litter. I mean, the best puppy from a crappy litter is still a crappy puppy.  Just saying. The same thing goes for the runt.

Many people will toss that term out and say “oh I don’t want that puppy, it’s the runt”. Why? It may not have been the smallest at birth. It  may be at a different growing stage than its siblings. It may be a late bloomer and it may just be smaller. Who cares? Do we live in such a super size-orientated world that we cannot possibly accept value in something smaller than its counterparts? Maybe if breeders charged by the pound or used slide measurements like a pumpkin patch we would see more people reaching for those smaller puppies first.

Personally, I  really do not care what someone else may view as the  pick of the litter.  I also do not care if the puppy I like happens to  be the smallest  (Gasp! The dreaded runt!!). When I look at a litter of  puppies I am  looking at three things: temperament, attitude and working  structure.  Size, color, etc. do not even enter the equation. When it  came to Icon,  he was the puppy that nobody wanted, including me.  The  runt. The  outcast.  The untouchable. I kept him because nobody else  wanted him. I  resented the fact that buyers looked him right over due  to his  diminutive size. How dare they judge such an outgoing, brave  little soul  who could offer them everything that the other puppies  could except for  size. At 6 weeks of age I decided that the people  judging him just  weren’t good enough for him and kept him back “until  he grew” (or so I  told myself).  It was one of the best decisions I have  ever made.

I  didn’t want a puppy at that time. I didn’t want a male puppy. I  didn’t  want Icon. He had other ideas. He set about forming a bond so  deep with  me that he would skip meals and play times just to sit next  to me and  stare adoringly at me, waiting for me to notice him. He would  escape the  warmth of the puppy pen at night to sleep in the cold  hallway so that I  would find him when I opened the door in the morning.  I quickly became  enamored with his stubborn streak. His fits of puppy  rage and  indignation when he couldn’t reach the things that the other  puppies  could fueled his little puppy brain to work overtime to figure  out new  ways to accomplish what he wanted. My fascination and  admiration for him  quickly grew and I finally admitted the truth to  myself. The puppy that  I had never wanted, the one that never wanted  anything but me, was my  dog and I wouldn’t change that for the world.

Today, 2.5 years later  he still stares adoringly at me. Now, he doesn’t  have to wait for me to  notice him though, because I am as addicted to  his presence as he is to  mine. We are codependent, we spend all of our  time “telling” the other  one how great they are and we have fun. A lot  of it. Now when people  notice him and compliment him, I laugh a little  inside. I always wonder  how many of them would have looked past the  “runt” status and chosen him  for themselves. He gets compliments on his  work and on his looks. He  has his own following now, his own fans and  his own accomplishments. Not  bad for a runt. 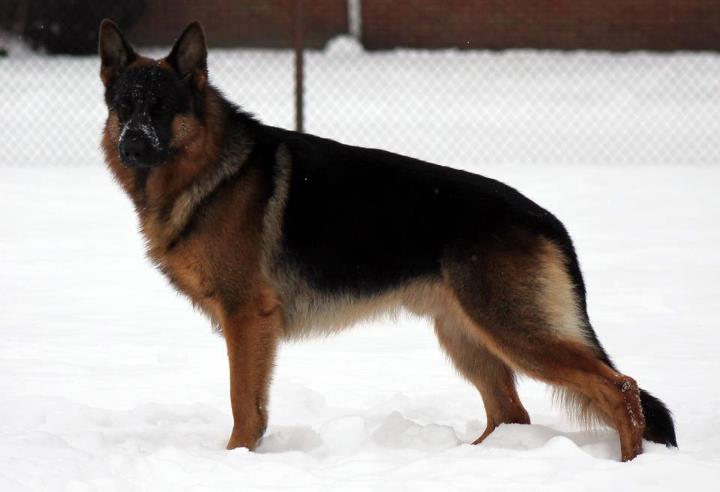