I am a weight puller. My dogs and I enjoy the bonding that we get to do when we are out on the track together. The competitive nature that goes with weight pull – beating other dogs to work for that title-of-the-day of Most Weight Pulled or Most Weight Pulled Per Pound (also known as the Pound-for-Pound/Percentage) – is a personal humanoid rush. The dogs, at the end of the day, don’t give a darn if they got it. They just know they worked so hard for me and that I cheered them on as the weights got higher.

Why have they done this? Because the human end of the spectrum got petty. The human aspect of the sport decided that it was more fun to lodge complaints and cause petty drama that has now hurt dogs that are competitive in weight pull – my dogs included. I don’t train for a ‘buy here, pay here’ title. I train my dogs to continue to improve. To push past that threshold of doubt in myself and the peak of greatness that I know, deep down, my dogs are capable of. The title just adds a little bit of justification for all the work I put in that the dogs earned, but it’s a piece of paper in the end and the time I spent with the dogs is far more important.

I must admit, when I first got news of the official changes after the probationary period, I was angry and I was hurt (probably to an extreme in the eyes of many UKC weight pullers). I felt that they should have canceled the program for what they did to it. That the program was/is a shell of its former self and still do to an extent. I guess it’s the competitive nature that I still hold close to my heart – the desire to continue to pull against myself and against others and push my dogs to become the greatest in their own rights.

There are rumors that this is just a probabation. That UKC will continue to make changes to bring weight pull back to what it once was and eliminate the problem children. I hope this is true and not just empty rumors. Until it happens, I’ve put my two best weight pullers on temporary retirement with UKC and will continue to pull the youngster (Mika) and the not-so-adept Lyric there to work to improve form and have a good time together. 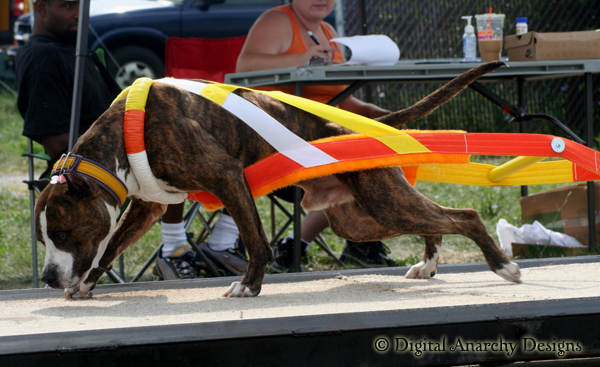