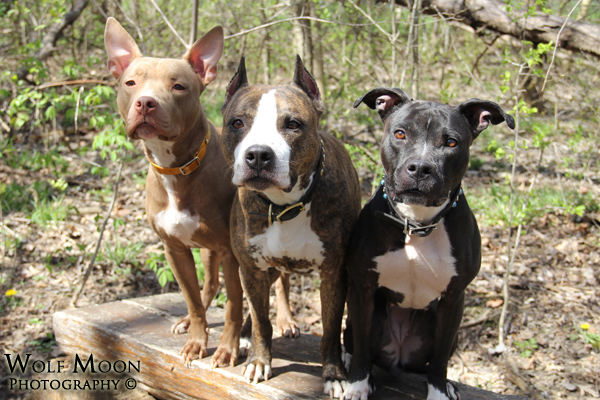 I often get asked a ton of questions when people find out I own pit bulls.  The questions typically range from “Oh, my God!  You own baby killers?  Aren’t you afraid they will hurt your kids?” to “Oh, how awesome!  Do you breed and can I get one of your puppies?”.  (Truth be told, I absolutely hate both of those example questions, but I get them both all too frequently!)

I filter through the questions now like a pro.  I almost have to at this point since Luna will be nine years old in a few short weeks.  I stay honest and try to keep my answers to the point and void of emotion.  Why do I do that? Well, let’s face it…we all love our dogs, but people who own pit bulls need to realize that the breed has developed a bit of a problem because of its popularity and because of that popularity there and the problems associated with it, there are people who abhor the breed with a passion.  There are far too many hands in the cookie jar when it comes to these dogs – breeder, rescuer, and pet owner…we all play a part in the problem and we need to play a part in the solution.

The question that I get asked the most is one that still makes me think long and hard on an answer for.  Well, I’ll start with the tale of the first time I was asked the infamous question, “Why did you pick the pit bull as your breed of choice?”

We were at the Novi Pet Expo and Ryker was just a youngster at the time.  We’d gotten him one of the silly clown collars to wear to keep him occupied trying to capture and also to look bloody cute.  He succeeded at the latter, but not so much the former.  While he was busy rolling around on the ground and looking like a nerd we had woman came up to our booth and looked over the pseudo barriers at the silly looking puppy rolling around on the floor.  She had scars all over her arms and a couple on her face and she was apprehensive near the dogs.

She asked me that fateful question after relaxing a bit realizing neither Luna nor Ryker had even the slightest bit of bad body language toward her.  I don’t remember exactly how I answered her in a way that made her feel comfortable telling me she had been attacked by one nearly three years prior by a dog that looked similar to the wiggling, brindle idiot on the floor next to me.  It made me sad and angry knowing these facts – going through all of that by a breed I love and cherish.  This woman, through all of this, didn’t hate the breed.  She blamed the dog that did it and the owner…not the breed as a whole.  She was still rightfully scared of them but not so much that she asked to pet Ryker who willingly threw himself at her and presented his belly.

It was truly an eye opener that despite all of the bad examples showing up in the newspaper nearly every single day that there is still reason to work to salvation the breed’s reputation.  Now, to get back on the topic since I rambled off a bit.  Why did I pick the pit bull as my breed of choice?

To this day, I can honestly say that I never pictured myself owning the breed.  They weren’t even on my radar.

I saw myself owning a Malamute or a Siberian Husky truthfully.  Those two breeds reminded me of wolves and the closer to my favorite totem animal and I drooled over having one.  I realized that I was absolutely out of my mind after doing research on both breeds that neither was suited for me or my lifestyle.

My first on-my-own, real experience with a pit bull in my adult life made me fall head over heels for the breed.  Angel was a deaf, solid white girl with bright green eyes.  She needed a place to rest and heal before being placed and I was apparently the ‘perfect’ place.  I didn’t know she was a pit bull at first and once I found out I was enthralled and, admittedly, a little scared at the time.  She wasn’t with me long but I knew at that time I found my breed.  The stability, the temperament, the energy level, the avenues I could pursue with them was endless like my imagination.  I couldn’t stop thinking of all the things I could do with my very own pit bull.

Sure, I knew the horror stories about the baby killers and people maulers.  I also knew the realities in the breed. These dogs are NOT for everyone and they have their flaws – like the fact that a good portion of these dogs do not prefer the company of other canines or small and fuzzy creatures.  Let’s face the facts – these dogs ultimately became the best dog-on-dog combat animals bred by man, but that same selective breeding allowed for human stability unmatched – when properly selected FOR that temperament.

That being said, there are far too many people that I see and hear about with these dogs that makes me want to cringe.  They don’t deserve these dogs.  Only about 60% of those who own, breed or rescue these dogs need to be doing that in my opinion.  That number may be higher or lower, but far too many people get these dogs as an ego extension and don’t realize the hard work that goes into making a good bully breed ambassador.

There is far too much greed in breeders (not all, but many). Sadly, it isn’t just the BYBs trying to make a living.  Some ‘responsible’ and well known breeders have fallen off the wagon by producing too many or subpar dogs.  They have put aside health testing or even titling their dogs.  It’s a shame really because people should look at the ethics of a responsible breeder and know they truly want to improve and help the breed and not just keep reproducing the same crap over and over again.

Many rescuers are just as guilty as the breeders they abhor.  I’m sure everyone has heard the same mantra:  ‘Don’t Breed or Buy While Shelter Animals Die’.  The want to believe that the ‘No Kill’ philosophy means saving every animal that graces their doors.  The reality is so much more different that it’s sad.

Since the ‘No Kill’ philosophy is based on saving animals that are adoptable dogs that are shy, fearful, aggressive toward people or children, unmanaged aggression toward other animals (the kind of unmanaged that may mean a re-direct or inability to change the dog’s direction through focusing on something other than the other animal/dog) shouldn’t be on the list considered adoptable – especially with pit bulls and their mixes.
Many rescuers see a sad face and want to save the animal, but the reality is that if it isn’t safe, is scared to death of the world around it (which may likely mean a fear biter) or too sick to treat, the kindest option is humane euthanization.  It sucks, but rescuers are the cleanup crew for the stupid pet owners and of the world and they need to be strong and save only the best knowing that stable dog may die if they save the dog cowering in the back of the kennel.

Pet owners are the final problem and in many cases, the biggest one.  Far too many people go out and get a dog and don’t research the breed and this isn’t any different for new pit bull owners.  They go to the pound a local rescue group or even a breeder and expect this magical creature that they’ve been told about only to learn that there is a lot of work that goes into these dogs – training, socialization, exercise, etc. – and more often than not, it causes new owners to get into a bit of trouble for their lack of research (or sometimes media reaching trouble if they didn’t pick out a stable dog).

This isn’t to say that there aren’t pet owners who don’t do a ton of research and many who do some research but learn and continue to grow over time (I can name a good many I know who continue to learn and grow even after minimal research), however the alarming number of media stories happening because of a ‘pit bull attack’ needs to stop and until people face the realization that the pit bull might not be for them then we’ll continue to have this issue.

I am no expert in the breed and I’m continually learning, reading and schooling myself to better the lives of my dogs, however I ultimately chose this breed because I wanted a dog that could do everything (and researched, and researched…and researched some more) – a phenomenal sport dog and family companion.  I’ve succeeded with the dogs I have now and gone above and beyond my expectations and work to set new goals and tasks to keep their minds busy and me learning new things and couldn’t ask for a better breed for my lifestyle and what I want to accomplish in life.