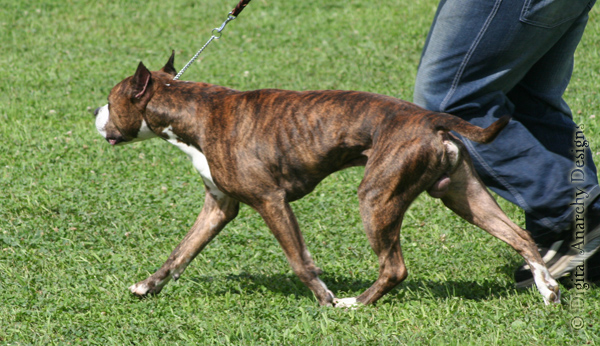 The American Pit Bull Terrier (APBT) is idolized as ‘America’s Dog,’ but yet this dog dies by the hundreds and thousands in shelters across the nation.  ‘America’s Dog’ has become ‘America’s Epidemic’ because of the mass amounts of puppies being pumped into this world by irresponsible breeders who are only looking for the next buck that they’ll make from the puppies they produce.  The end result for many of these dogs is the back room where they will be euthanized by either lethal injection or gas chamber.  If you have never sat through a mass euthanization of unwanted dogs, cats and other animals it is truly depressing.  These animals know, despite the cooing, pets and kind words that they are going to die.  If you don’t believe me and don’t want to sit on the real thing, there are many videos out there on Google on the hard work that shelter staff must go through when an animal’s time is ‘up.’

You will hear the same mantra every single day by those who spend countless hours cross posting, fostering, volunteering and saving these dogs and other animals from an uncertain fate to not “breed or buy while shelter animals die.”  These people live the day to day of cleaning up after those individuals who do not give a flying rip where the offspring of their beloved Fido that they just had to breed to make a buck.  As an appreciator of purebred dogs, I find this utterly appalling that they have to go through this.  The reality of the matter for breeders and other fanciers is that we must police our own.  We are our brother’s keeper for the fate of ‘America’s Dog’, the APBT.

The term breeder is not a favorable description in the rescue community and with what they go through, it doesn’t surprise me either.  The difference between your ordinary, run of the mill “breeder” (also known as a BYB, backyard breeder or puppy peddler) and the responsible breeder is a set of morals and ethics when they produce a litter.

The above mentioned points are just a few of the checks and balances that breeders impose on themselves to ensure that they are breeding to improve and not continually pump out animals that will likely end up in a shelter or on a euth list.  There are many more, but it would take many more blog posts to even begin to go into them.  For a general code of ethics for responsible breeders, I suggest going here.

While the rescue community often seeks to lynch those who breed, they lump all breeders together – those that are responsible and those that peddle.  The two groups are not interchangeable because responsible breeders work to keep the offspring they produce out of shelter system by breeding infrequently and screening heavily for proper placement and they also often help out rescue groups.  Ultimately, without purebred breeders…responsible purebred breeders, we will lose breeds and the domesticated canine population would die out in 20+ years with nothing but spayed/neutered animals around.  While it’s not the brightest outlook, it’s the reality.  We ultimately need responsible breeders for all breeds to continue to breed high quality dogs and shelters, rescues and adopters to help eliminate the overpopulation problem that is occurring now while we work to eliminate two main problems in canine society – breed specific legislation and puppy peddlers.