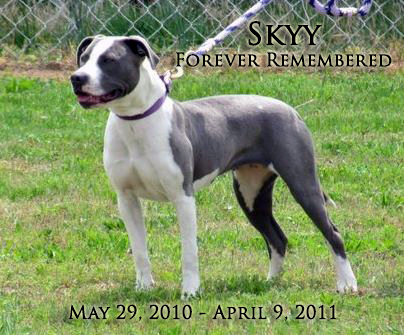 In less than twenty-four hours, we are making our almost annual pilgrimage to the Palmetto Pit Bull Club’s show.  This show, which is open to dogs registered with the American Dog Breeder’s Association (ADBA), has been part of our round of shows since we started travelling for the events that the ADBA put in so many years ago.  This show, however, has a far more significant meaning because of a tragedy that struck three years ago before the club moved their show from the Burke County Fairgrounds in Morganton, North Carolina to their current venue in Waynesville, North Carolina.

On April 9, 2011 a fast moving storm rolled into the fairgrounds just as the puppy classes were wrapping up – which I remember all too well since our then little Mika had JUST finished taking a 2nd place.  Dogs and humans were moved into what we thought was safety but not before a wicked blast of lightening reached out and struck a beautiful blue and white dog named Skyy, killing her instantly.  The lightning strike that took her life saved her owner who would have no doubt died if this beautiful girl hadn’t taken the brunt of its force.  The reverberating force from the storm sent nine other people to the hospital after other dog show patrons, utilizing tables as gurneys while paramedics were called, was a fierce reminder to all involved that life was too precious.

Seeing fellow dog show enthusiasts waste no time to help fellow man and dog alike despite mundane dislikes or friendships was a truly awe inspiring.  No able-bodied person failed to help in some way – even if it was as simple as making sure those injured were kept calm and as comfortable as possible while every living being was rounded up and brought into the building to ride out the rest of the storm – which included softball sized hail that damaged at least one vehicle seriously and dented many others.

Those of us who were there have formed a far closer bond and many friendships were formed because of the sacrifice of one dog’s life.  On April 9th every year, many people change their profile photos on Facebook to Skyy’s photo in remembrance for the life lost and the tragedy that was survived and healed from.  We will never forget.  Play hard at the bridge, beloved little girl.  Your memory carries on.