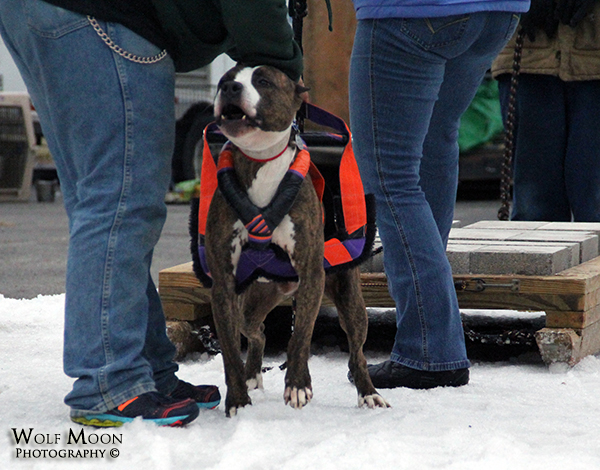 On Sunday, we went out to watch the afternoon pull for the World Wide Weight Pull Organization (W3PO).  I honestly didn’t go with the intention of doing anything but watching a bunch of good pullers have fun on a really challenging surface but little did I know that I would be poked and prodded until I actually caved and agreed to let old man Ryker have some fun on the snow pad.

For anyone who’s ever pulled on snow, they know that if the conditions on the pad (snow track) aren’t absolutely perfect in both weather and actual track conditions, it can be a puller’s worst nightmare because of the difficulty of that particular surface.  Ryker has always excelled on snow because he learned early on what it took to break the sled when it started to freeze to the track but it has been many years (January 2011 was the last time we did snow) and I never thought we would see the surface again so all of those habits for breaking the sled free have long since been broken because they are unsuitable for wheeled or rail tracks.  Thankfully, the harder it got, the more pissed off he got and the harder he tried to beat that cart…until he couldn’t any longer.

It was, by far, one of the sloppiest days because the temperature sat at forty-something degrees 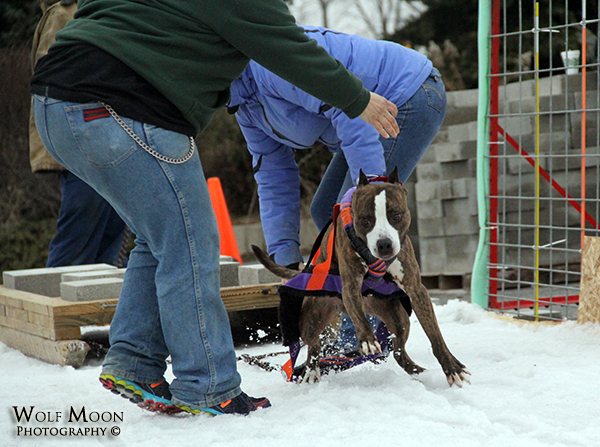 all day and made the track slushy until the sun started to fall – then it froze and fast.  One by one, dogs bowed out – unable and unwilling to work against the fast freezing track with its ever increasing difficulty level.  Ryker was one of three remaining pullers at the end with the other two being a Greater Swiss Mountain Dog named Royce who weighed in at 115 pounds and a Newfoundland weighing much more.  It was an honor to be in the last three pulling – especially with both dogs weighing well over double the forty-six pounds that Ryker weighed in at.

In the end, Ryker bowed out at 28.97 times his body weight.  This translated to 1,333 pounds on a slushy, difficult track.  He fell short of the Most Weight Pulled per Pound (which is based on the percentage of weight pulled versus the gross weight) that was a little over 32 times the dog’s body weight which was done by a nineteen pound Basenji named Roxie that pulled that one off!   It was, none the less, a very impressive day.  There were many dogs who pulled well into 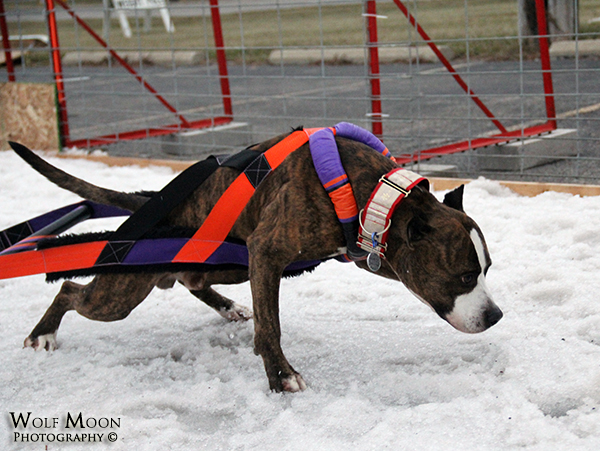 the 20x range – including the relatively new pulling dog, Royce, who at only two years old shows a LOT of very good promise.

We are aiming to hit the W3PO’s next snow pull the weekend of January 11th in Luna Pier, Michigan.  This relatively new organization has given us bubbling new hope for the sport that we adore with the camaraderie that was ever present at the Michigan United Kennel Club (UKC) pulls prior to the big alteration of their weight pull program to dissolve the actual competitive aspect of weight pull.  We highly recommend anyone looking to get into the sport check out the group’s new page on Facebook or check out an upcoming event and be prepared to have some fun with your dog.