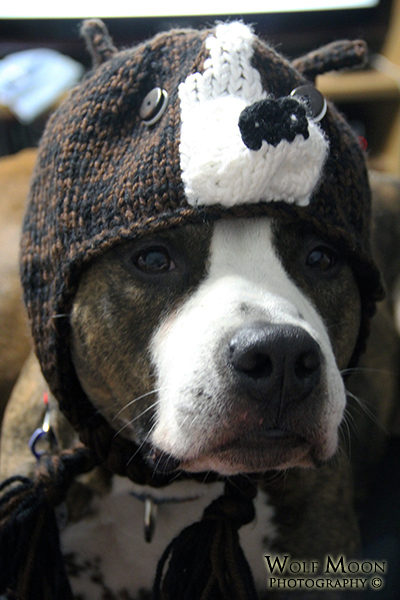 I recently saw a photo knit hat fashioned after a Rottweiler being worn by a friend of mine.  I, of course, had to know where the heck it had come from and if they could do a pit bull-based one because it is often a pain in the butt to find items like that with my breed of choice as the theme.   Little did I know she not only would but made them based off of your own personal dog!  (How utterly awesome is that?!)  I totally had to purchase one as soon as possible.

As soon as my friend Lori, the one with the Rottie hat, gave me the link to the Indigo Moon Fibers Facebook page and I posted a picture of my boy, Ryker, on there and asked to order one.  I knew he’d be a touch difficult because he’s brindle and has flashy white markings.  Pam, the owner of Indigo Moon Fibers, said it would take a few weeks since she was a bit backed up with custom orders but assured me she’d get to me as soon as possible.

While she’d said it would be a few weeks, it wasn’t nearly as long as I had expected with a custom order.  She messaged me during the process to find out a bit more about his color scheme – was he more a chocolate brown and black or a black and reddish brown brindle?  I described what I felt was the best answer and she went to work.  Let me tell you, she nailed it perfectly.  Getting his brindle pattern identical wasn’t going to happen but she nailed the brindling as close as it could be.  It was truly amazing.  (Ryker, of course, was not amused at his likeness being worn and attempted to snatch it from me when I showed him the hat.)

The hat itself is incredibly well made and the cost for a custom item is really, really reasonable ($35 shipped).  It fits perfectly and the yard she used to knit with is very, very soft.  I washed it on delicate (because I accidentally dropped it in a muck pile while visiting the shelter to show it off while doing photos…oops!) dried on a low setting.  It handled it well and still looks just like when I had opened the package from her without any frizzing.

This hat actually makes me long for the cooler months that are coming so I can wear it more often.  Until then, I will wear it at any chance I can and it has already taken up residence in my car so I have it when I need it.  I truly can’t say enough good things about it and can’t wait to order a couple more of the other dogs so I can change them out occasionally.