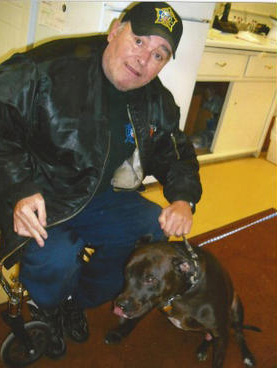 Officer Sak, a former Chicago police officer who suffered a debilitating stroke, was forced to be apart from his service dog, Snickers, because of the breed of the dog.  Snickers, you see, is a pit bull mix.  After a federal court date, which occurred today, an Iowa judge ruled in favor of the injunction to allow Snickers back with his handler and partner.

The Animal Farm Foundation was kind enough to make sure Snickers was boarded and cared for during the seperation from Mr. Sak – which occurred on December 14th after the city of Aurelia city council said that the service dog had to go regardless of the Americans with Disabilities Act.

This is one more chip in the armor that Breed Specific Legislation once held.  With cities relying on an entire genre of dogs being labeled as inherently dangerous to prove their point of view that banning these animals is the right thing to do for the safety of the public.  Congratulations Officer Sak and service dog Snickers.  You’ve done well for disabled handlers everywhere and helped with a positive breed image.